With the World Cup months away, companies are rushing to wrap up infrastructure projects in Qatar, to the detriment of migrant working conditions: workers report extended work hours without adequate overtime compensation, misuse of short-term visas, and withholding end-of-service benefits. Workers have been protesting in their accommodations and more recently outside the ministry offices, recording and sharing these protests on TikTok videos and other social media.

In recent weeks, three main protests have come to light, two of which are related to some of the biggest companies in the country – Bin Omran Trading and Contracting and Urbacon Trading & Contracting Company (UCC).

These are not the first instances of exploitation by these companies (see sidebar below).

In a report in August 2021, Migrant-Rights.org (MR) had highlighted the practice of using project visas by many companies including UCC to bypass both Qatar Visa Centre processes and Qatar’s labour laws.

UCC Workers MR spoke to say there are two main concerns currently: one is the lack of proper overtime compensation. The second is the repeated extension of short-term visas, with each term not extending beyond three months. According to workers MR spoke to, hundreds are currently employed on short-term visas. Under these short-term visas, workers end up working for a couple of years, but without a QID, health card or end-of-service benefits. “To go to a private doctor is very expensive and we can’t afford that. The company is not helping us. Also, so many of us are working such long hours and as some projects wrap up, we are being sent back without our gratuity,” according to one worker from India.

UCC has been awarded some of the largest and most important projects in Qatar, most of which are directly contracted by the government. These include work on the Hamad International Airport, Qatar Museums, Amiri Terminal and Souq Waqif. In 2014, during the renovation of the Sheraton Hotels, protests broke out as guards held back UCC workers from leaving the work site during their break. Workers said that they were prevented from going on their lunch breaks to use the bathroom and grab a drink of water, and that the guards struck them with steel rods and stones.

UCC is also currently involved in the construction of The View hospital, which is a collaboration with Cedars-Sinai, a California-based non-profit medical centre.

BOTC’s projects include roadworks for Ashghal, apart from those on World Cup sites, as well as roads leading to the Al Bayt Stadium in Al Khor and restaurants within it, works on Bani Hajer and Rayyan Stadium.

Earlier this week, Doha News reported that UCC employees were informed they would have to work additional hours each day, and on Fridays – the standard rest day for non-shift workers – and that they are being forced to do so without overtime pay. In its response to the news portal, UCC said the additional hours were optional, and “compensated in accordance with the Labour Law.”

Qatar Labour Law stipulates overtime payment is calculated as follows:  overtime shall be paid with an increment of 25% over the hourly rate. If the overtime work occurs between 9 pm to 3 am, then the increment shall be 50%. The total actual working hours per day cannot exceed ten hours (including overtime), unless it is necessary to prevent the occurrence of a grave or serious accident or to repair the effect of such loss or accident. For work done during a weekly off day, workers must be compensated by another rest day and be paid for this day the basic wage due for an ordinary working day, in addition to an increase of at least 150% of his wage.

Despite the slew of reforms in recent years in Qatar, non-payment of wages remains rampant, with the Wage Protection System doing little to identify and correct violations in time. The WPS also does not provide a payslip to allow workers to verify these overtime calculations.

UCC is building several projects in Qatar’s Al Wakra town, which will be a major touchstone of the World Cup events.  Included in their projects are residential units for workers.

In another case, workers from Bin Omran Trading and Contracting (BOTC) told HRW that they have not been paid over the past five months and that their wages have repeatedly been delayed in previous years as well. BOTC has a number of projects directly linked to the World Cup, including infrastructure connected to stadiums and highways.

The workers had filed numerous complaints over several months, through the Labour Ministry, the Labour Court, the Qatari police, and the National Human Rights Commission. Workers say the Qatari police promised their payment by the end of February,  but no compensation has been made so far.

HRW also raised the issue with Qatari authorities exactly one month ago, but to date have not received a response.

BOTC reportedly sent out letters to the workers threatening to reduce their wages if they do not keep working, despite continued non-payment. Workers sent out their own memo to management, with a desperate plea for their dues and a reminder that their wages are a lifeline for their families back home. 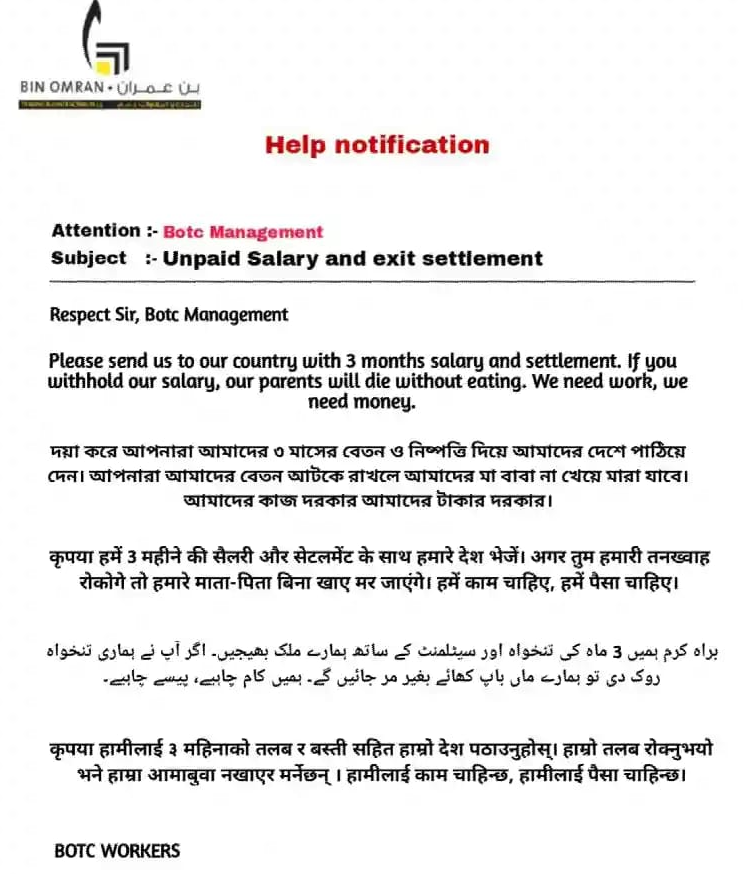 A letter from BOTC workers to management (Click to enlarge)

Both companies are obligated to adhere not only to Qatari labour law but to the Supreme Committee’s Worker Welfare standards, which in theory provide an added layer of oversight.

Earlier this year, workers of Al Jazira Group – a construction, real estate, and auto service firm – had complained of non-payment of salaries for over three months.

Migrant-Rights.org has previously reported on the gaps within mechanisms intended to protect workers in precisely this situation: Qatar’s Wage Protection System, complaints procedures, and the Workers’ Support and Insurance Fund. The fund has failed to compensate the majority of victims of wage theft, and thousands of workers have given up claims to move on to other companies, or returned home and still await their dues.

Furthermore, the many barriers to accessing justice and the delays in complaints and court procedures make it untenable for workers to fight against violations of their contracts.

Qatar is under pressure to wrap up all major infrastructure projects, both directly and indirectly related to the World Cup in the next five months. A notice was circulated by Ashghal – Qatar’s public works department – at the end of last year instructing all its contractors to wrap up work by September 2022 and reduce the number of migrant workers in their employment.

September 2022 to 18 January 2023, all Contractors shall prepare a strategic plan for workers’ leave which maximises the reduction in the number of workers in the country during the period. Further, it should not adversely impact the migrant worker’s well-being and established RPD projects’ targets and objectives.”

Construction companies, mainly subcontractors, also confirmed to MR that the directive has been communicated to them informally as, but there is no clarity on how the number of workers can be reduced without impacting their business.