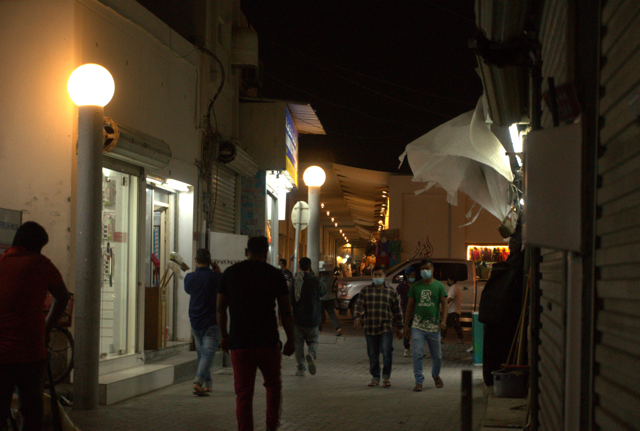 The rising cost of living and poor labour practices has made low-income migrant workers even more vulnerable in Bahrain.

In a 2022 survey by InterNations, Bahrain ranked 15th in “best destination for expats living and working abroad”. Although Bahrain ranked first in the same survey in 2017 and 2018, the results were nevertheless celebrated in local news with headlines like “It’s the good life for expats!”.

The survey only tells half the story. Low-income migrant workers — who make up the majority of the country’s private sector workforce — tell the other half. Though Bahraini companies in key sectors are seeing substantial profits, wages for migrant workers remain stagnant and out of pace with the rising cost of living.

The prices of most consumer and food products, electricity and water bills, and other essential products, have increased rapidly in recent years — so much so, that in April, some parliament members proposed issuing ration cards to nationals “to ensure people in Bahrain do not go to sleep hungry.” According to MP Ebrahim Al Nefaei, “average people are struggling to make ends meet, so you can imagine how difficult it must be for low-income families and pensioners.”

This proposal did not extend to migrant workers, who make up nearly 50% of the Kingdom’s population.

Citing inflation and this year’s VAT hike, the General Federation of Bahrain Trade Unions (GFTBU) renewed calls to raise the minimum wage for Bahraini workers to BD700 BD (US$1,857), stressing “that anything below this salary does not meet life’s obligations” in Bahrain today.

Bahrain has no minimum wage for non-nationals and private sector workers, and migrant workers earn far below the minimum living wage suggested by the GFTBU. According to Bahrain’s Social Insurance Organisation, 71% of expatriates working in Bahrain’s private sector today earn less than BD200 (US$ 530) a month. MR recently spoke with a number of workers from various sectors who reported wages as low as BD60 (US$158), and to others who have not received any pay adjustments in over six years.

The number of non-citizens earning less than BD200 in the first quarter of 2020 was around 1.6% higher than in 2010, despite the fact that there were more foreign workers in Bahrain in 2010 than there are now. 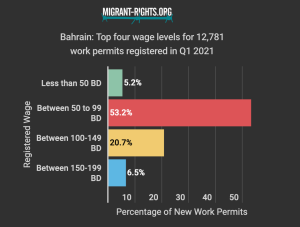 Aside from MR’s interviews, there are a number of indications that many migrants earn significantly less than BD200 per month. According to the most recent data from the Labour Market Regulatory Authority (LMRA), the majority of work permits issued in the first quarter of 2021 were for jobs with wages ranging from BD55 to 99 (US$146 – 262), followed by jobs with wage levels ranging from BD100 to BD149 BD (US$265 – 395). Additionally, there were 663 jobs registered in that quarter with wages less than BD50 BD (US$132).

Migrants responding to the expat survey in the “Letters” section of Bahrain’s Gulf Daily News outlet (GDN) further corroborate the prevalence of these very low wages. The GDN’s Letters section is one of the few public forums where migrants can voice their opinions on issues affecting them.

In a letter headlined “Revise wages!” written by an anonymous resident, the author writes: “ENOUGH is certainly enough. It is high time we agree to the fact that private companies in Bahrain must wake up and realise how poor paymasters they are.” Adding that, “Many companies have stopped bonuses and annual tickets while cutting the salaries of their staff and refusing to reinstate original pay cheques despite their balance sheets recording profits.”

In another letter responding to the “good life for expats” claim, the writer asserts that the article “does not reflect reality”, adding that “The salaries of most expats have not increased in about 17 years! The cost of living has gone up, prices of almost all commodities have risen but the salaries have remained stagnant.”

In yet another letter to the GDN published a few days ago, the writer states that “Those who work in Bahrain do not get fair money. The cost of many goods has increased but our monthly salary has remained the same. We request the Bahraini government to ensure that we get a fair price.”

Another commenter also posted: “Every year the basic salary is going down. I am sure it will reach a time when people will work for a pack of biryani.”

With no private sector minimum wage, access to an endlessly renewable supply of workers from all over the world, and a rigid visa system that restricts employment mobility, employers can readily hire workers without needing to raise wages.

In the past, state subsidies and assistance across the Gulf region included non-citizens to a limited extent. But with the general retreat of welfare provisions in recent decades, migrants have been the first to be excluded from these provisions, particularly in Bahrain.

For instance, the Bahraini government removed meat subsidies in 2015, effectively doubling the price of beef and chicken. The government distributes cash handouts to Bahraini citizens to partially compensate for the rise in meat prices. In the first weeks of 2020 alone, 165,310 Bahraini families received cash handouts totalling BD 7 million (US$18.57 million).

Few topics in GDN’s Letters section receive more attention than the astronomical water and electricity bills that migrants in Bahrain experience. Every summer, when these bills skyrocket, residents take to the GDN’s letters section to complain:

User @feemaison posted: “EWA (Electricity & Water Authority) bills are very expensive during summer. I just have one AC on and the bill is more than BD100.”

In December 2021, after it was revealed that unpaid utility bills amounted to around 200 million Bahraini Dinars, people took to the letters to complain about the high cost:

“You know the reason behind unpaid bills. Instead of making news, do the needful. Reduce your tariff charges so people can pay on time.” said another user.

“I guess if EWA bills were affordable, people would pay on time.” posted user @malcolmdsouza5

When it was revealed that 71% of non-citizens make less than BD 200, user Red Wing posted: “So now you can imagine how we are paying our rents and EWA bills.”

Last year, Bahraini MPs also approved a proposal to require non-citizens to pay BD100 (US$ 265) per month for each child enrolled in public school. The legislation is currently under review by the government.  Locals expressed their frustration over the decision in the GDN’s letters section:

“This is unfair for expats. Everyone is struggling. They should support people who were born here and are still expats. Expats are paying higher rent, higher EWA, LMRA and now BD100 for education!”

Another post read: “Please, let it be free. There are so many who cannot afford this BD100 fee. Education should be free.”

Though the economic downturn triggered by the pandemic and low oil prices exposed many migrant workers to wage theft, job loss, and evictions, their precarity is part of this larger pattern of social and economic marginalisation. The country’s economy is now rebounding as Covid-19 restrictions ease and oil prices increase, but the situation for many migrant workers remains dire.

During the first quarter of 2022, the net profits of Bahrain-listed companies increased by 62% year-on-year, reflecting a profit increase in key sectors. Recent findings from the Information and eGovernment Authority’s “Business Confidence Environment” survey indicated a positive outlook for business performance, profits, and competition in the second quarter of 2022. The survey includes both small and large businesses. Furthermore, Bahrain’s sovereign wealth fund (Mumtalakat), which owns several key companies, has also recently revealed that it has registered its highest net profit since its establishment in 2006.

In recent months, local news reported a noticeable increase in the number of people begging in the streets of Bahrain. According to the reports, most, if not all, of those who beg for money are migrants.

In a long report published in May 2022 in Alwatan newspaper titled “An annoying and uncivilized phenomenon that worries citizens”, a group of economists and “experts” callously argued that beggars are draining the Bahraini economy by sending collected money abroad. One economist even stressed that “all beggars in Bahrain are foreigners” and indicated “that Bahrain is not one of the countries where poverty is widespread … it is one of the richest countries in the world” and that “there is a group behind foreign beggars.”

None of these pundits acknowledged the lack of adequate support for migrant workers, the harsh working and living conditions in Bahrain, or the high cost of living as reasons that explain the rise in begging.

This phenomenon is not exclusive to Bahrain alone. According to a recent Saudi television report, many cleaning workers who were paid an average of SAR510 (US$135) resorted to begging in the streets to make ends meet. A survey conducted by a Saudi news channel revealed that the basic pay of some cleaning workers was as low as SR 350 per month (US$93). Saudi police recently reiterated that they will arrest and deport beggars and ban them from re-entering the kingdom.

Instead of extending social protections to migrants and improving working and living conditions, the Gulf states have criminalised begging. Migrants who are caught begging face imprisonment, fines, and deportation. Bahraini authorities arrested a number of migrant beggars in Muharraq last year.

In recent years, international organisations have understandably devoted considerable attention to wage theft, which surged during the pandemic. But it is equally crucial for organisations to advocate for living wages and decent living conditions for all workers, including migrants, especially given the current growth in Gulf economies.

Earlier this year, delivery drivers staged a rare labour protest in the UAE, demanding better pay and working conditions. The workers’ actions compelled several companies to raise wages and improve working conditions. Similar collective actions are needed across the region and across all sectors to compel companies and governments to reform.

But while Bahrain offers migrant workers a relatively greater degree of freedom to organise than other Gulf states, migrant workers’ voices remain generally underrepresented within Bahraini trade unions. On paper, workers can join unions, but in practice, their marginalisation under the Kafala system —  which renders many workers either temporary or irregular —  hamstrings their participation. The GFTBU, Bahrain’s main worker’s rights organisation, focuses mainly on issues related to national workers. This is reflected, for example, in the GFTBU’s campaign on raising minimum wages, which concerns only Bahraini workers, as well as the union’s motto for this year:  “Bahraini workers, decision not choice”,  which calls for employers to be required to only hire Bahrainis.

The exploitative labour migration system, which sanctions low wages and the exclusion of migrants from welfare benefits, should concern everyone, including Bahraini citizens. Welfare provisions and workers’ rights typically begin to erode for migrants first before expanding to the rest of the population, especially during times of crisis or when oil prices fall again. Both nationals and non-nationals stand to benefit from improving working conditions and challenging the private sector’s systemic wage suppression.