Over 600 migrant workers stranded in derelict camps are fighting for months of owed wages. 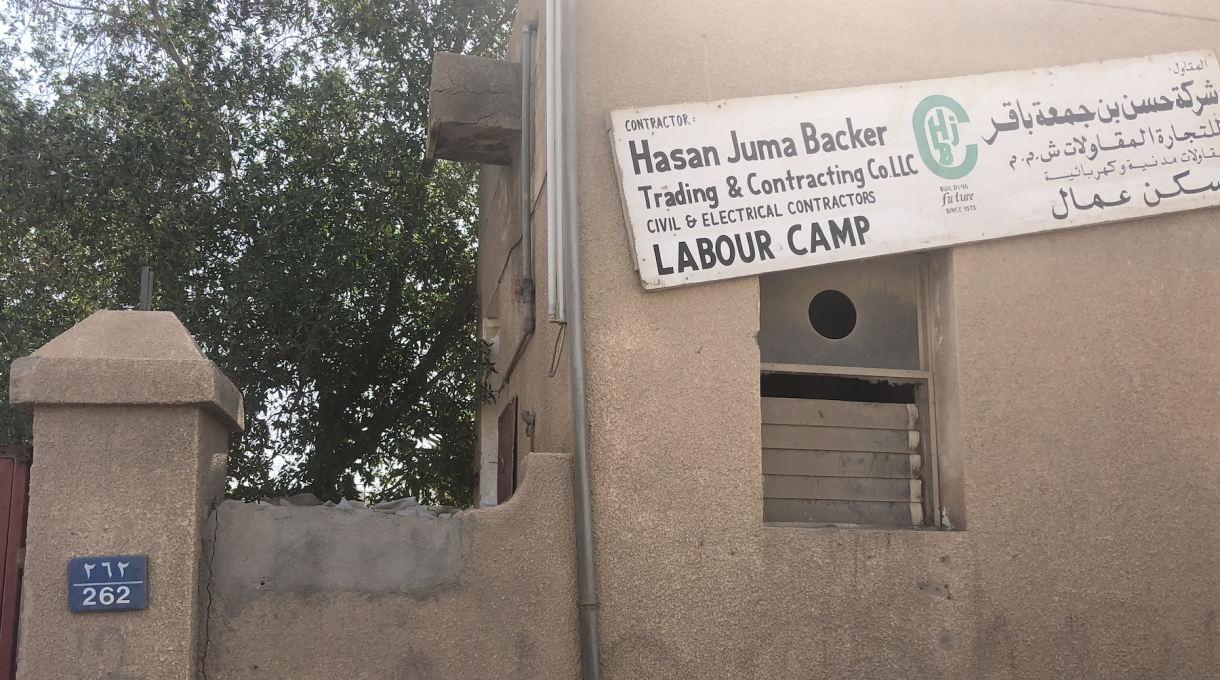 In the Ghala Industrial area of Muscat is a decrepit labour camp housing about 250 workers, most of whom are from India alongside a few from Bangladesh and Pakistan. . Close to 400 of their colleagues are spread across a few other camps in and around Muscat.

For the past 10 months, about 650 employees of the Hasan Juma Backer Trading and Contracting company (HJB) have not received their wages. Most of their visas have now expired, and they don’t leave the overcrowded camp in fear of being picked up by police. Though the company failed to renew their work permits, it is the workers who bear the liability of paying their overstay fines to exit the country or face prosecution.

In recent weeks, they have relied on food relief from local charitable organisations.

“We died when our ‘arbab’ (boss) died in 2016,” says one of the camp elders. Some of the workers have been with the company for as long as 25 and 34 years, while most others have been with HJB for around eight to ten years.

Mohammed Sadeq Khan, Pakistan: "I’ve been stuck here for 7 months. Some others here for a year. They just give promises. We want to go back home soon, with tickets and what’s due to us. They promise NOC and they promise dues but nothing has come through. We are suffering. We don’t want NOC (permission from the employer to change jobs). We just want to go back. Have been working here for 12 years. They owe 8 months salary and these 7 months we have been sitting idle."

They turn down all offers for relief and supplies. “What will we do with so much food here when our families are starving,” says one worker. Another chimes in, “we don’t want phone cards, because what’s the use of calling our families when we have no answers to their questions… ‘when will we get money’, ‘when will we come back’...”

They all chorus the same request. “If we can be sent back that’s all that we want. Some brought money from home to pay fines and have returned. We can’t do that,” says Mohammed of Bangladesh.

“What will we do with so much food here when our families are starving.”

In 2018, HJB ranked amongst the top companies in Oman. They almost exclusively worked on Government projects. Some of their most prominent projects included construction on the Royal Guard of Oman, Sultan Qaboos University, Public Establishment for Industrial Estates, as well as road and waterworks infrastructure for the Omani government.

According to senior staff, their profit in 2018 was OR26million (USD68million).

When the chairman and majority shareholding partner Hasan Juma Backer passed away near the end of 2016, there was a tussle for power. His son Ahmed Hasan Juma held 30% shares and Krishnakumar Taori, the group Managing Director, also held 30%.  Upon Hasan Juma Baker's passing, his 40% share was divided between Ahmed Backer and his seven sisters. When Taori gave power of attorney for his shares to Ahmed, Ahmed gained absolute majority control of the company. Taori, who also runs a business in India, no longer lives in Oman.

According to lawyers working on the case, Ahmed then withdrew close to OR25 million from the HJB's bank account and proceeded to liquidate the company, foregoing new project offers. Though his siblings filed a case against the liquidation, the court ruled in favour of Hasan Juma Backer LLC.

Meanwhile, the company had stopped paying wages to close to 650 workers still working on its projects between June and July 2018. The workers were benched when their visas expired, as the company refused to renew their papers. Over 75% of the stranded workers are now on irregular status.

As of 5 March 2019, the catering company that provided food to the labour camps terminated its services, as HJB had not cleared dues of tens of thousands of rials.

The Case and the demands

Barrister Dr. Ahsan M Rajput of CONSUS Chambers/MWALC, who has taken the workers’ case via his law firm, says a few basic demands have been made of the liquidators for immediate redressal.

“This is one of the richest companies in Oman, with several ongoing projects. Yet we have this situation. Clearly a white collar crime,” he says.

According to Dr. Rajput, in the first stage of negotiations the liquidators were asked to assist with food, health, and wellbeing of workers; return their passports and provide an unconditional NOC, and to waive all overstay fines so workers can return home.

“They have agreed to these terms, though the NOC would be against employment offer and not unconditional. In the second stage, we will work on specific mechanisms on payment of dues over a 45-day period, including recurring dues and civil damages.”

Migrant-Rights.org contacted the liquidators, Hamad Al Sharji Peter Mansour & Co, and had not received a response at the time of publishing this piece.

Two months ago, the workers protested outside the company headquarters and the manpower ministry registered their complaint, promising action, but no action has been taken (see document).

The workers also repeatedly reached out to Nagesh Vatsyayan, the General Manager of the company. “He promised help initially, now he doesn’t even answer our calls.”

Migrant-Rights.org reached out to Vatsyayan but did not receive a comment.

Phulchand, from India: "Our family is so sad. So many problems. They gave us false promises and made us work. I’ve worked here for 22 years. They also promised they’d renew our visa, but they didn’t."

Just in due wages and benefits (without compensation) the company owes the workers a total of roughly OR1.5 million (USD 3.8 million), according to lawyers representing the workers.

The workers were earning between OR45 to OR90 as basic pay, with overtime pay increasing their take-home by 60-90%. They are owed these wages plus their end of service benefits - one of a month of salary for every year worked.

Because the Ghala camp is better connected and houses the majority of the workers, close to 100 workers from smaller camps have been moving into this space.
Bunk beds are laid out in the open area between portacabins, most of which are either already overcrowded or too damaged to house anyone. Malfunctioning air conditioners, interrupted water supply, ruptured sewage systems, and garbage accumulation augment the problems even more. The unhygienic living conditions attract mosquitoes, and lack of proper medical care has caused many workers to fall ill. 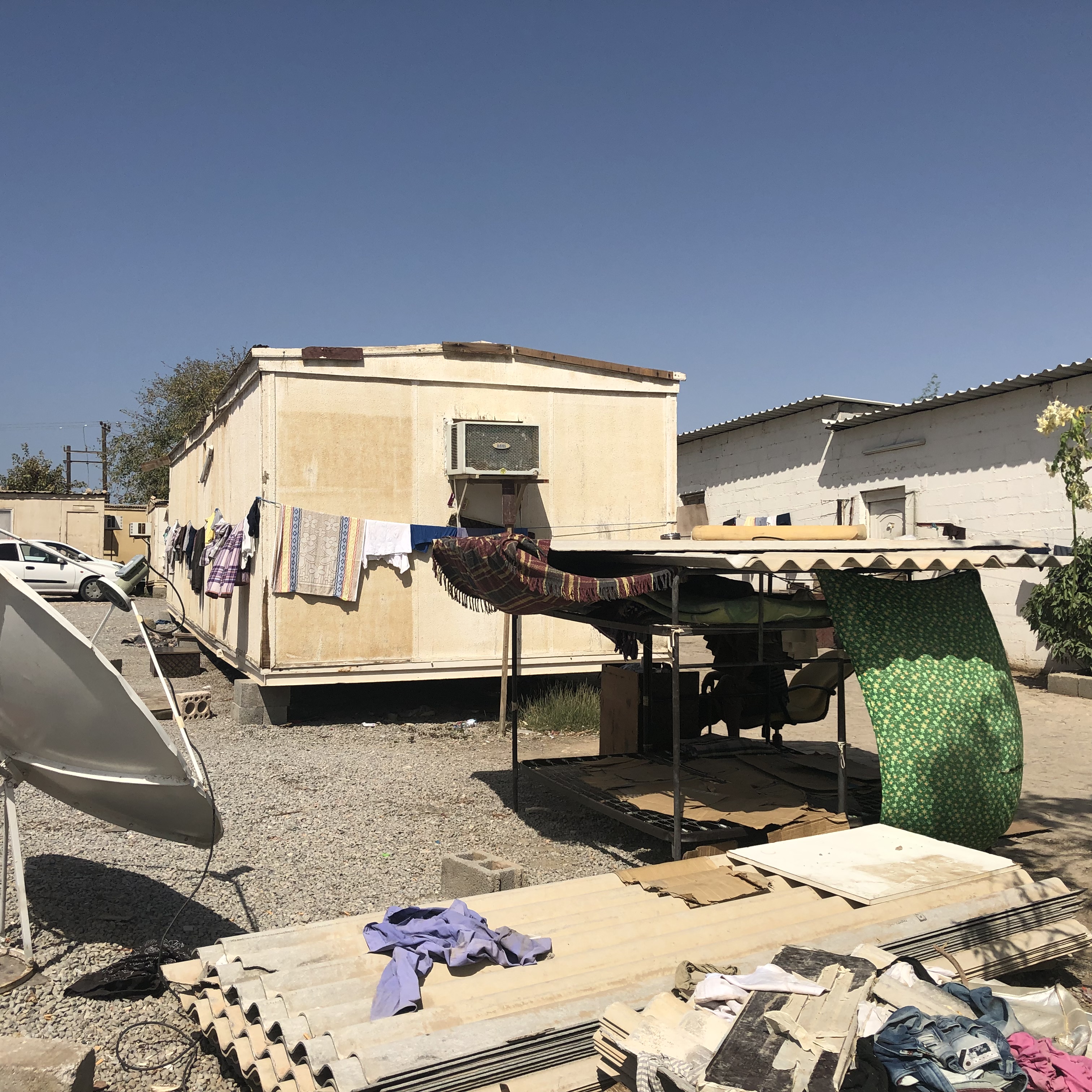 Some of the men have to sleep outside because the camp has become overcrowded.

“Since July last year, even though we were not paid we were forced to continue working. The company said if you continue working we may pay you next month, but we don’t have money now. So we continued working without pay for months,” says Jamaluddin from Bangladesh.

Now, none of these workers leave the camp. A younger colleague says they are too scared to go out and look for another job as they will be picked up by the police.

A visibly distraught Ramashankar (see video), from Rajasthan in India, moves into the centre of the circle and is on the verge of breaking down. He has been with the company for six years. His daughter was unable to sit for examinations as there was no money to pay the fees. “We are sleepless. You come any time of the night and you will see us sitting around crying. We are all mentally disturbed.

“It is so humiliating to take charity… we are able-bodied men. We have never eaten a morsel of food that we haven’t worked for. Not us. Not our families. Here we sit morning till night, idle, eating other people’s charity. We might as well die.”

How can we eat here, when our family is suffering back home, asks Ashok.

“We have lost mothers and fathers, some of our children have had to drop out of school. How can we get over all this? We just want to go home.”

Ramashankar from India: "Send us back as soon as possible. We are suffering a lot. I request minister Sushma Swaraj and PM Narendra Modi to help us or we will die there. The embassy is not supporting us."