Kuwait’s amnesty provides a risky reprieve for some migrant workers

Kuwait’s amnesty for irregular workers started on April 1 and will run until April 30. Migrants who have overstayed their visas or are otherwise undocumented will be allowed to leave the country without paying fines and will be allowed re-entry in the future, unless a ban is placed on them for outstanding bills or legal cases.

The opportunity to return home may provide a welcome reprieve for many of these workers, who now struggle to buy food and pay rent amid the COVID19 crisis.  With stay-at-home orders and the closure of non-essential businesses, most irregular workers are no longer able to earn their daily wages. However, repatriation is an important consideration of any COVID19 response in the region, there are critical risks that do not appear to have been taken into account.

According to community groups in Kuwait, the amnesty process is well-organised and incorporates some of the recommendations Migrant-Rights.org issued last week.  Workers are bused into a one-stop centre where all their paperwork is processed on the same day. They are provided temporary shelter and food while they wait. 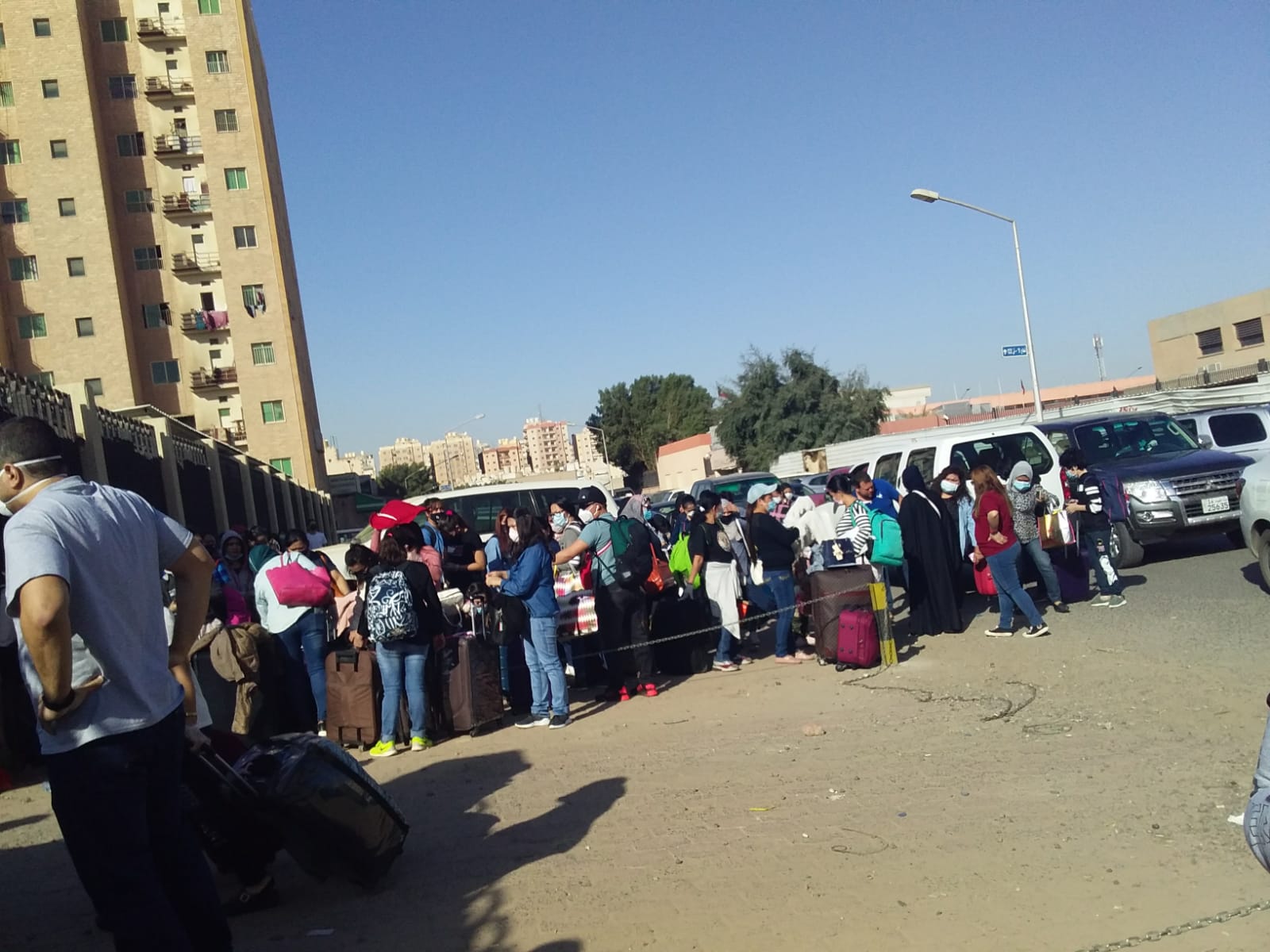 The queue outside the school where amnesty paperwork is being processed.

The demand for the amnesty is large, with over 500 workers per day being processed at the centres. The centres are officially open from 8 A.M. to 3 P.M. but close once they reach their quota, which often occurs as early as 9 A.M. This means there is no way of decongesting queues or various points where paperwork is processed.

Each week, the processing centre is reserved for a particular nationality, with all other nationalities (primarily Africans) clubbed together for the last week. (Philippines, April 1-5; Egypt: April 6 –10; Bangladesh, April 11 – 15; India: April 16 – 20; Sri Lanka, April 21 – 25; and all remaining nationalities April 26 – 30).

This may pose an issue as there are a large number of African workers in Kuwait who may be unable to apply for the scheme, especially those who do not have an embassy in the country and need more time to arrange their paperwork. Kuwait had earlier planned to set up extra centres in Farwanya and Jleeb in the last week of the amnesty. However, with Jleeb now under lockdown due to several residents from the area testing positive for the virus, it’s unclear how these areas will be serviced.

Given the large volume of applicants and the short duration of the amnesty period overall, it is likely that Kuwait will need to extend the amnesty as it has in the past. Embassies of countries of origin have also reported their concerns, noting their limited capacity to respond to the short-notice period.

The Egyptian embassy issued a directive informing citizens stranded in Kuwait that if they are not eligible for the amnesty – i.e., if they are on a visit visa and in possession of their passport – they must register with the embassy, where they will sign an undertaking to pay for their own flights and for their quarantine facilities upon their return to Egypt. 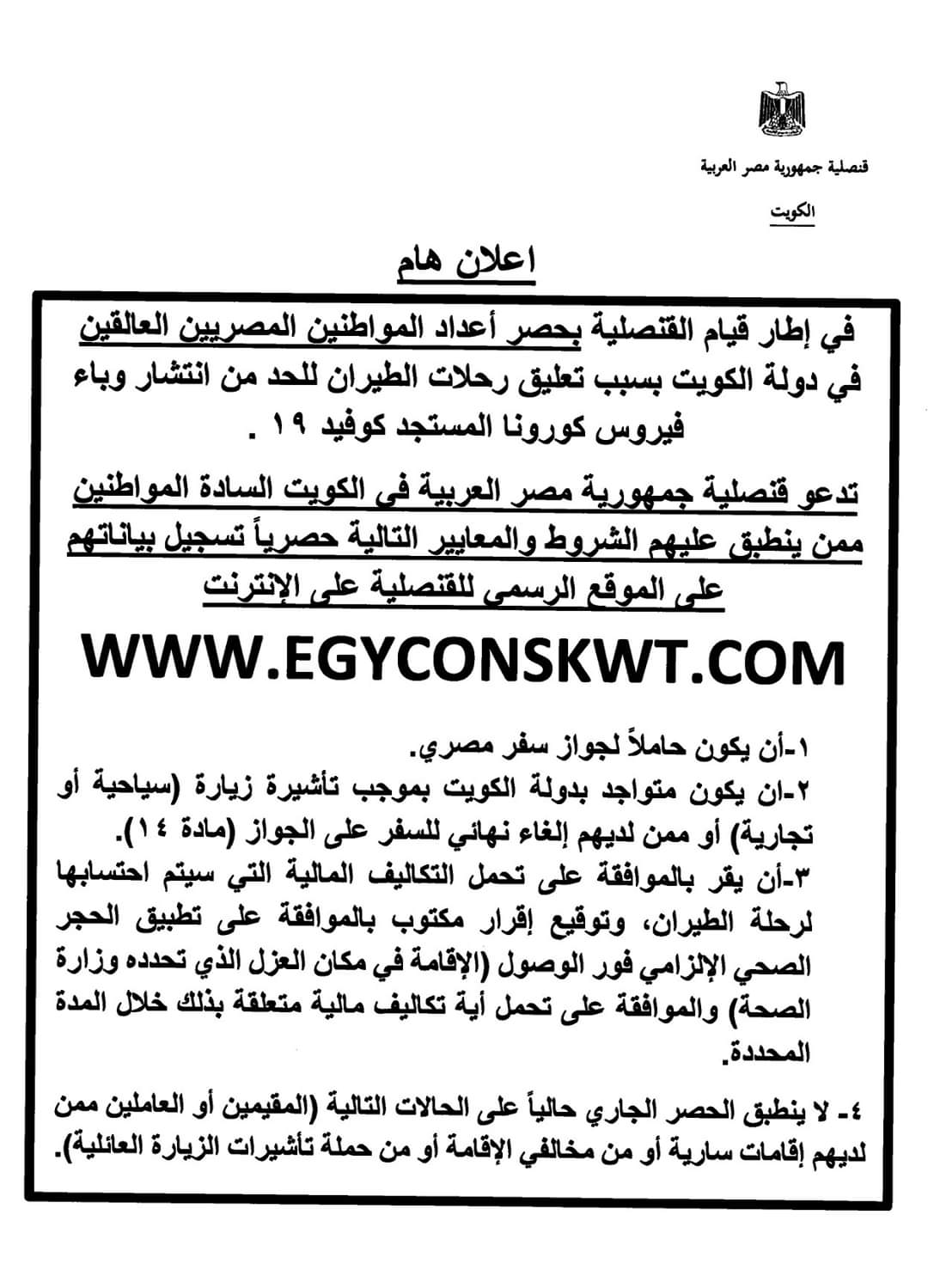 Not all workers are eligible for repatriation; over 700 Filipinos were turned away due to ongoing court cases, bank loans, or bills, according to a source. Most are also not eligible to regularise their stay, and the option to do so is only available to domestic workers, those who became irregular after March 1, 2020, and a limited number of other non-nationals.

There is also a reluctance by many to avail of the amnesty because of the precarious health and economic conditions in their home countries. Workers with unpaid wages also do not want to leave without guarantee of their dues.

The Kuwaiti government is paying for most repatriation flights via Kuwait Airways (those on visit visas or expired visit visas will need to pay their own way and coordinate with their embassy, though they will not have to pay any fines). While this is a positive move that will help workers who want to return home to leave, the risks of mass repatriation do not appear to be fully addressed. There is no pre-departure testing of amnesty applicants so far. Many workers will be returning to countries that may have not have the capacity for testing, particularly in the more remote areas where many of these workers will travel on to. The number of people they encounter in transit to their home cities will pose a further health risk.

The preparedness and willingness of countries of origin to accept returnees need to be factored into the government response. For many migrant workers, returning home may remain the only option as they are unlikely to find jobs in the tough economic climate. However, Kuwait can help minimise public health risks through pre-departure testing, providing safety equipment to applicants,  and loosening restrictions on regularisation.