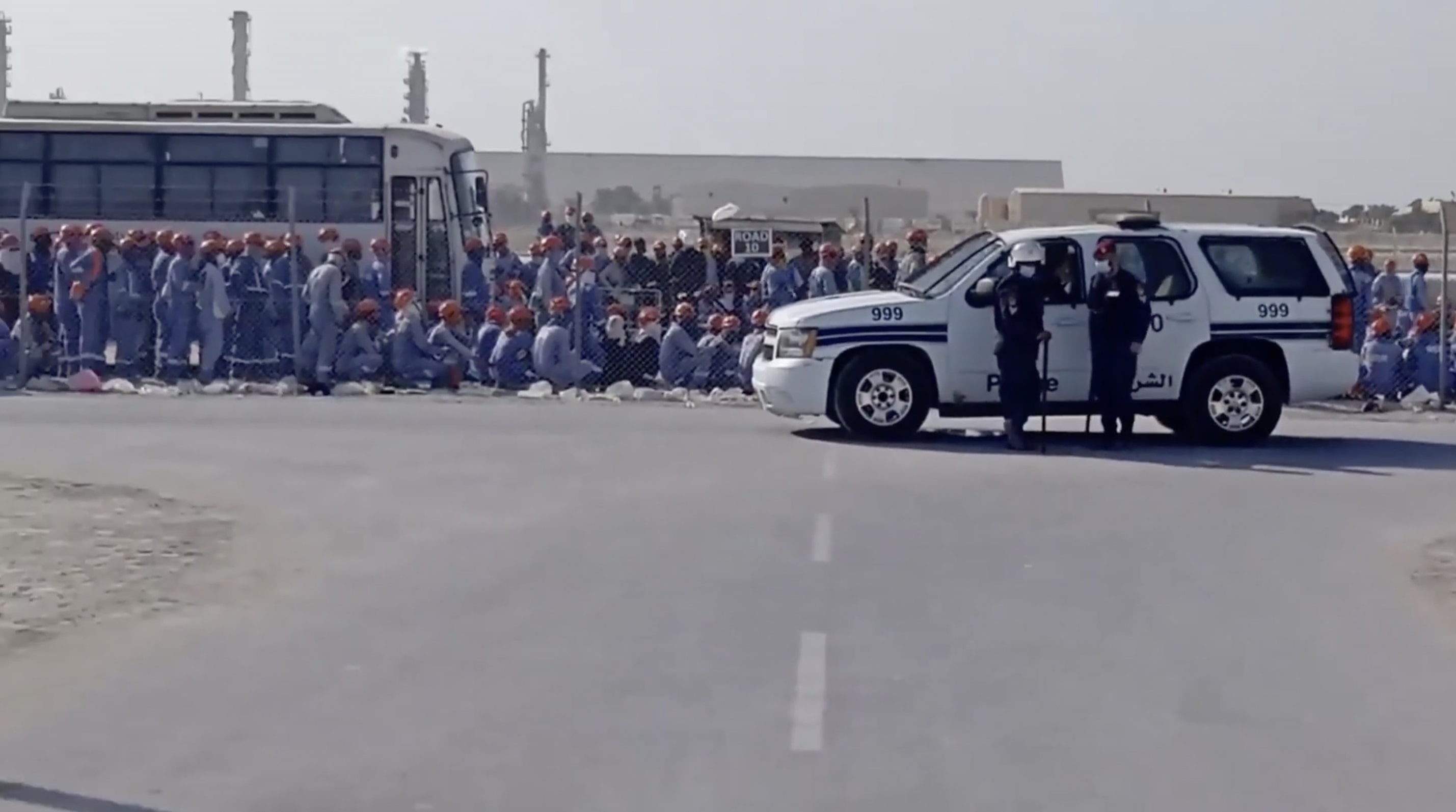 Update November 11 2021: According to BAPCO, the workers who participated in the protest were NSH workers, not BAPCO workers. While the veracity of this statement remains unclear,  BAPCO still remains responsible  for the welfare of the employees of the companies it contracted. The initial article stated that TechnipFMC was one of the companies of the TTSJV joint-venture. However, it has come to our attention that TechnipFMC is a wholly separate subsidiary of Technip Energies and the company’s name in the article was changed from Technip FMC to Technip Energies. Read the latest update here.

According to sources, the workers were complaining about several issues, including unsafe working conditions, unhygienic and crowded accommodation, non-payment of wages, and substandard food. The workers, hailing mainly from India and Nepal, initiated a strike on Tuesday, 7 September, after one of them allegedly had sunstroke and was hospitalised.

The strike morphed into a week-long protest when the companies' security personnel began to intimidate and harass the workers. According to sources on the ground and several videos circulating on social media, some workers were severely beaten, sustaining acute injuries including bloody bruising.

It is unknown exactly how many workers participated in the protests, but videos suggest that their numbers run over a thousand at least. Some international news outlets reported more than 2,000 workers in attendance. 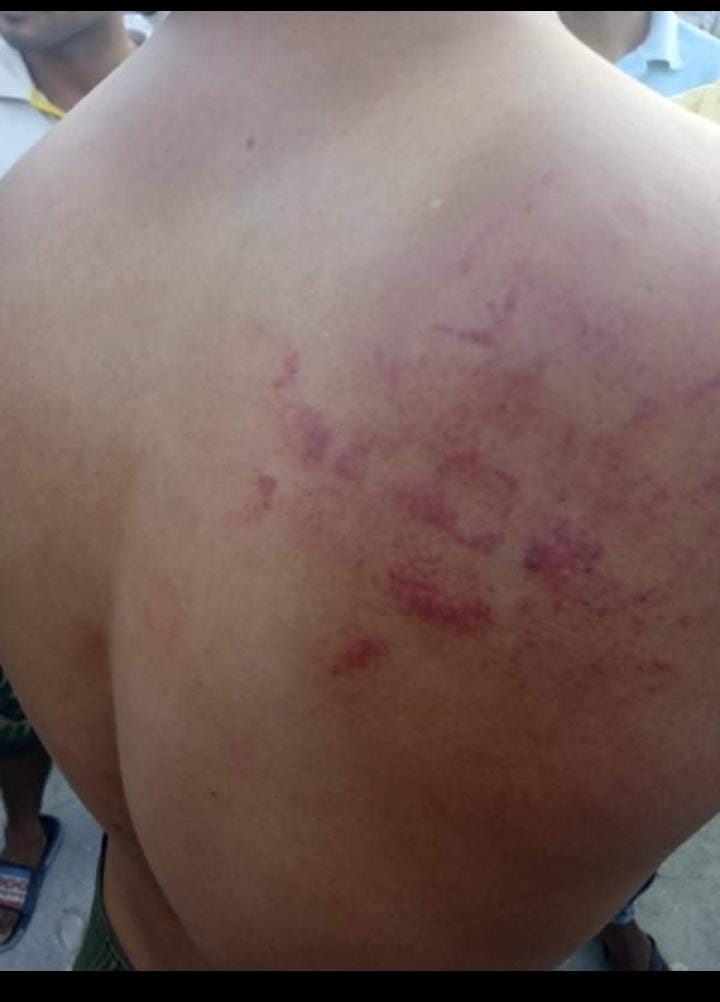 One of the workers who was beaten by security personnel.

In one graphic video circulating online, one worker is seen protesting as blood gushes out from his slit throat, while he exclaims that he has a wife and family and cannot go home empty-handed. It is unclear how the worker was injured and what his current condition is.

According to some reports and sources on the ground, several workers have allegedly died or fell sick in the past months. Migrant-Rights.org (MR) could not confirm these claims, but social workers in Bahrain told MR that the workers  blamed the deaths and sickness on the companys’ working conditions, unhygienic accommodation, and lack of safety equipment.

The companies, Nasser S. Al Hajri Corporation W.L.L and Gulf Asia Contracting Company LLC, are both owned and operated by the Indian billionaire tycoon Ravi Pillai. NSH is one of the biggest industrial contractors in the Gulf region, specializing mainly in the oil and gas, construction, and petrochemical sectors.

NSH has a history of abusive practices, including wage theft, non-payment of end-of-service benefits, and poor working and living conditions. On 30 January 2021, 161 former NSH workers staged a protest in front of Pillai’s residence in Kollam, India.

Pillai is one of the richest and most powerful Indians in the Gulf, and has strong ties with government officials in both India and the Gulf. He sits on the board of directors of NorkaRoots — a public initiative launched by the government of Kerala to "redress the grievances of non-resident Keralites both in India and abroad". In 2015, several ruling family members from the GCC were guests at his daughter's extravagant US$ 9 million wedding ceremony in Kerala.

MR has previously reported on how influential businessmen in the Gulf are able to exploit their connections to hinder workers’ access to redress, and enjoy a high degree of immunity against any punitive action.

Bapco, on the other hand, is Bahrain’s national oil company and wholly owned by the government of Bahrain. The company is the cornerstone of Bahrain’s economy and it is responsible for a massive portion of energy-related activities in the country; primarily refining, distribution of petroleum products and natural gas.

NSH and Gulf Asia Contracting Company LLC were contracted by Bapco along with a consortium of companies known as TTSJV, which is a joint venture of Italy’s TechnipFMC, South Korea’s Samsung Engineering, and Spain’s Tecnicas Reunidas, to undertake the multi-billion dollar project of expanding and upgrading Bapco’s existing refining facilities (Bapco Modernization Programme). It is unclear if the workers who went on strike included workers employed or managed by TTSJV.

Given the Bahraini government’s stake in this project, it is unlikely that officials will hold the companies criminally or administratively liable. MR has previously reported on how the Ministry of Labour and Social Development (MLSD) rarely sanctions errant companies, and especially those that are contracted by the government. Instead, the MLSD usually attempts to negotiate with the employer to rectify violations, without holding them legally accountable or imposing fines.

In some cases, the MLSD is directly involved in labour abuses: officials have previously threatened workers of G.P Zachariades to work without pay on government projects. When workers from Bahrain Services & Maintenance Co. B.S.C(c) (BASMA) — a large security and cleaning company with multi-million dollar government contracts  —  organized a protest last year against labour abuse, the MLSD, brazenly denied that the protest took place.

The MLSD’s statement on the protests (see below) indicates that this continues to be its modus operandi. Case after case demonstrates that the MLSD is not a neutral arbiter, particularly when it comes to companies contracted by the government.

The exact details on what happened with the workers of NSH, Gulf Asia Contracting Company, and Bapco are still unclear. Bapco and government security personnel have denied public access to the workers’ camp since the protest began. The workers themselves also live in an isolated area in Sitra.

Due to the restrictive environment, local media outlets that covered the story did not include a single testimony from workers,  instead parroting the MLSD’s statement alone. Local civil society organisations have been completely silent on the protests. The workers are on their own.

Migrant-Right.org urges the Bahraini government to allow for a transparent investigation into the allegations by the workers of Nasser S. Al Hajri Corporation, Gulf Asia Contracting Company, and Bahrain Petroleum Company, ideally by a neutral third party. The government must hold those responsible for the alleged labour abuse accountable and protect workers’ safety and labour rights everywhere. And as recommended previously, Bahrain must increase its labour inspectorate capacity and enhance its redressal mechanisms.

Statement from Bahrain's Ministry of Labor and Social Development

“A statement of clarification from the Ministry of Labor and Social Development:
Joint national efforts contribute to ending a strike for workers of a private company

In response to what was circulated about the workers of a private company recently striking at the company’s site, the Ministry of Labor and Social Development clarified that a number of its officials, immediately upon receiving a report about the event, visited the site and communicated with representatives of workers and management of the company concerned.

The ministry explained that these efforts, which were carried out in cooperation and coordination with the Ministries of Interior and Health, and the Supreme Council for the Environment, resulted in the formation of a joint committee from the company, the Ministry of Labor and Social Development and the relevant authorities, with the aim of containing the situation, addressing issues and meeting the shortcomings and services demanded by workers.

The ministry indicated that the company has already started correcting the workers’ conditions and achieving the demands they made, including the services provided in the company’s housing, noting the agreement to end the strike and the workers’ return to work starting today, September 12, 2021, and the necessity of the company’s commitment to labour regulations and legislation in the Kingdom Bahrain, and adherence to the requirements and specifications suitable for housing and a decent and healthy work environment. The Ministry of Labor and Social Development concluded by emphasizing that the situation has returned to normal between the company and the workers.”