An abusive sub-contractor gets way with impunity on Qatar's most important infrastructure project.

Khamis Rajab has finally given up his fight in Qatar and returned to Kenya, after being stranded for months without pay or proper documents. Rajab has been in touch with Migrant-Rights.org for several weeks now, sharing his distress. However, because he was still attempting to change sponsor, he preferred not go public with his problem until he exhausted his limited options in Qatar. 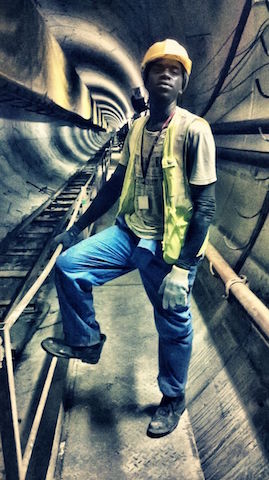 Rajab, on the Qatar Rail site.

In July and August of 2015, Rajab and a couple of dozen other Kenyans were brought to Qatar by Zentury Age Cleaning and Contracting Company. The workers were subcontracted to ISG JV and deployed to work on the Qatar Rail project, in their Red Line North Underground works. Salini Impregilo, Italy’s largest infrastructure group, heads the ISG joint-venture and won the USD2  billion deal in 2013.

The Red Line is one of four rail lines that comprise the Doha Metro project, and will link stadiums for the FIFA 2022.

Rajab recounted to Migrant-Rights.org the trauma he endured for over a year, until he left Qatar on 22 Oct, 2016, availing the ongoing amnesty.

Rajab, like his colleagues, paid a recruitment agent in Kenya about 70,000 Shillings (USD700). He was promised a job as a cleaner, on a salary of QR1500. He started work in August 2015, and was paid only QR800 plus a food allowance of QR200. His visa was never processed, and he worked without a valid ID for the period.

“Even this was never paid on time. We would be paid two or three weeks late, and it was becoming increasingly difficult to manage. We were paid till January of this year. Then even that stopped.”

At this point, about 40 of the workers were on the Qatar Rail site managed by ISG JV.  “On 19 March, after two months without pay, and we did not even have food, we stopped work.”

ISG JV gave the workers and Zentury a week to sort out the issues, and took the workers off the site, Rajab says. “They (ISG) have been treating us well and trying to force our company’s boss to treat us well and ensure we are well paid but the boss punished us by lowering salary and delaying pay day.”

The company also stopped paying rent for the labor camp four months ago, rendering the workers homeless. “One kind Egyptian man allowed us to use some rooms (see photo) but there was no air condition, and it was better to sleep outdoors. We hardly have money for food.”

The following is the gist of the complaints he filed while in Qatar:

“My name is Khamis Rajab, from Zentury company. My fellow 40+ Kenyans and I have been going through tough time in Qatar. We used to be more than 50 but the other Kenyans who got threatened by the Nigerian boss couldn’t bare more problems and went back home. The problems include;
Salary delay (paying from 20th  of the next month)
No medication, sometimes no food allowance to the newcomers for maybe a month and improper working gadgets leading to easy injuries and illness.
ID delay while he holds the passports. (I have been in Qatar for 8months now and he has been holding my passport since I arrived and I still don’t have ID. I have asked for it several times with no benefit)
New workers that arrive get to sleep for months in the accommodation while waiting for work day, without payments and sometimes no food allowance. Several Kenyans have been waking for work in the accommodation for a period of 3-6months.
We complain to him and cry for RELEASE but what he does is sending them back to Kenya.”

Migrant-Rights.org spoke to Abdul Razak, the manager of Zentury Age Company. He denied the problem at the beginning, but later conceded that the problem was ‘outdated’ and that no workers were stranded. “We have given passport back and NOC. Now no problem. The workers who are talking to you are ones who are making trouble.”

Rajab confirms that Zentury did return passports and issued an NOC for workers to seek work elsewhere. Except, there was one major problem. “We would find a job and then the new sponsor realises we don’t have an ID card. That we are ‘illegal’. So how do we find a job?”

Rajab places equal blame on the agents in Kenya who recruit workers for Zentury. “They take a lot of charges from the applicants and don’t tell them the details about company, at most Kenyans are told it’s a Cleaning Company and they add too much lies on it.”

Migrant-Rights.org received no response from the agents in Kenya, even after several calls.

Rajab initially didn’t want to go back to Kenya. When Migrant-Rights.org spoke to him in mid-October, he said he and his colleagues wanted a release to work in better companies. “I still want to work, my fellows too. We used to be around 50 but many gave up and went back to Kenya. I have been in Qatar for a year and 2 months, the penalty for staying in Qatar all that long with no ID is almost QR4000 and they want me to pay for it. I cannot transfer to another company because I got no ID.”

He subsequently changed his mind, and took advantage of the amnesty.

“Four of my friends stayed back because they don’t have the money. I did some daily wage jobs, and saved 960 riyals to pay for my ticket.”

He went to the Search and Follow Up Department (referred to by workers as the CID) with his friend, to turn themselves in. Both of them had passports and no identity cards. Rajab had the money for the ticket so was allowed to avail amnesty, but his friend was turned away. The family of these workers are currently trying to raise money to get them out.

At no point in the amnesty process did authorities attempt to speak to Zentury, he says.

Migrant-Rights.org has written to Salini Impregilo, the lead on ISG JV, for a comment, and awaits response. The case of Rajab and his colleagues epitomizes the deep, unchecked corruption in subcontracting. The failure of large organisations like ISG JV to vet contractors and to weed out exploitative subcontractors renders workers very vulnerable.

That Zentury managed to bring in workers with a job order from ISG, and yet did not process their work visa, only shows the lack of due diligence in the tendering and management of contractors.

Earlier this year, Amnesty International exposed the extreme abuse of workers by subcontractors on World Cup sites in Qatar. The report highlighted one of the main problems facing Qatar’s labor market – the warehousing and deployment of workers to various sites. As a result, no one main contractor is responsible for their well being, and main clients often absolve themselves of any responsibility. The absence of meaningful regulation and this deflection of accountability and was evident here with Qatar Rail, on one of Qatar’s most prestigious projects. 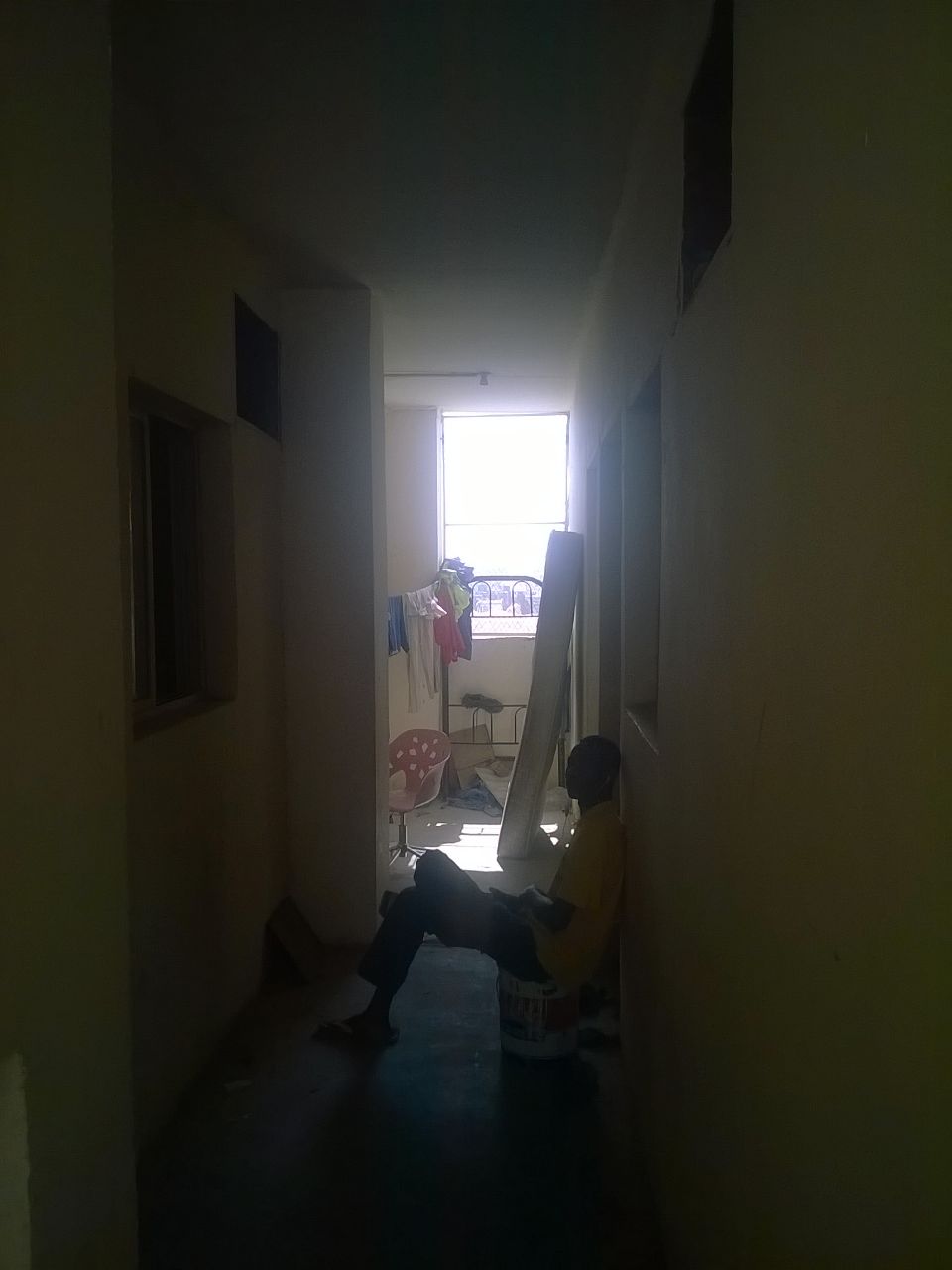 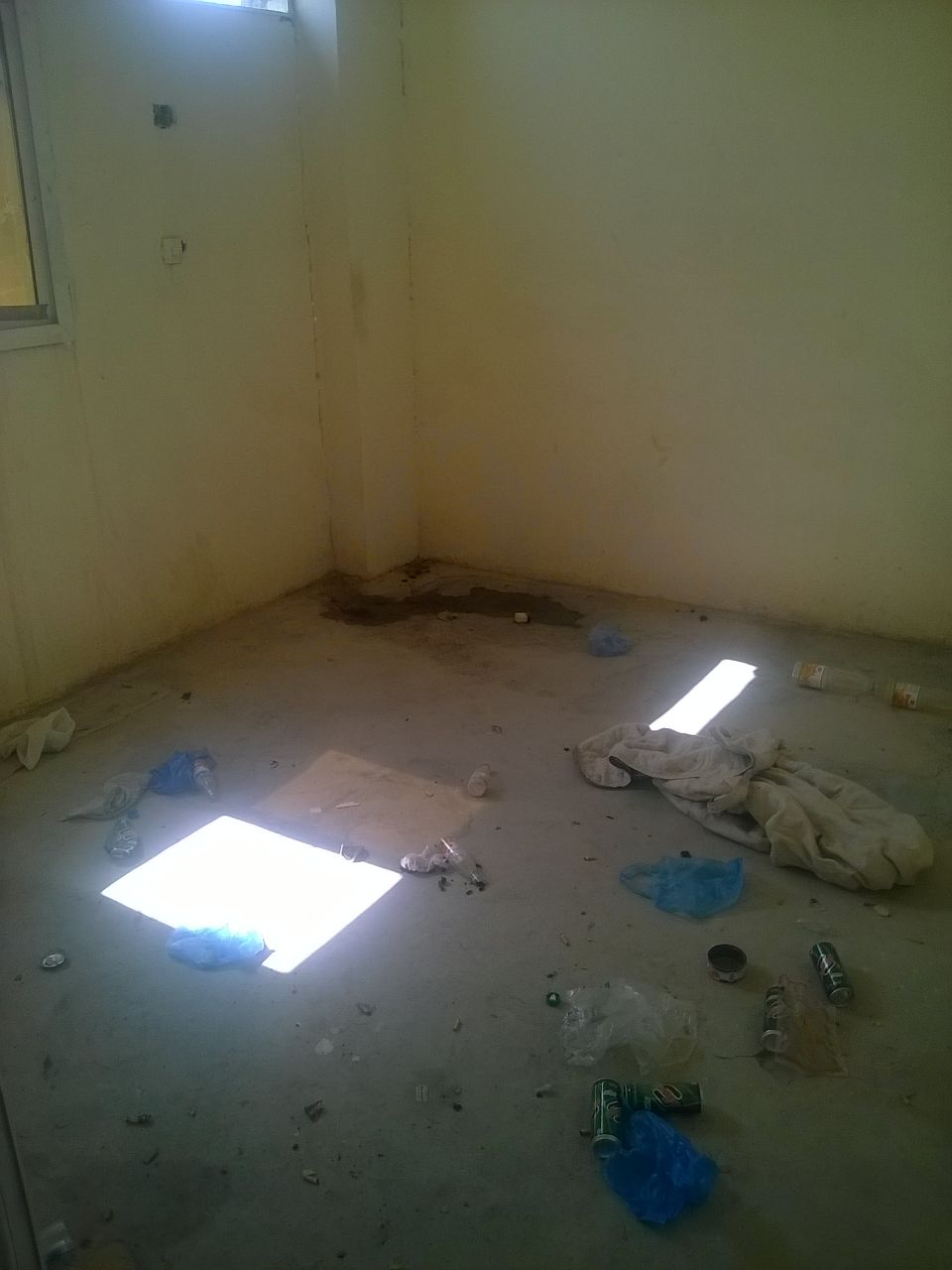 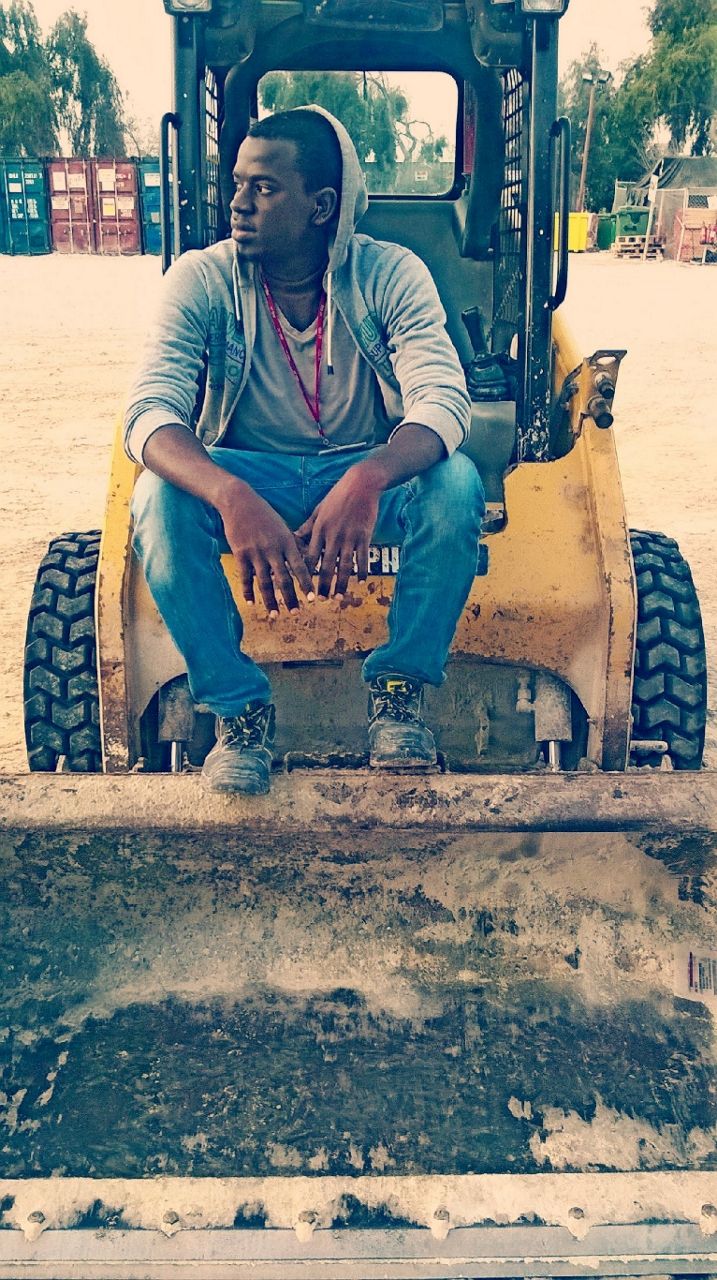 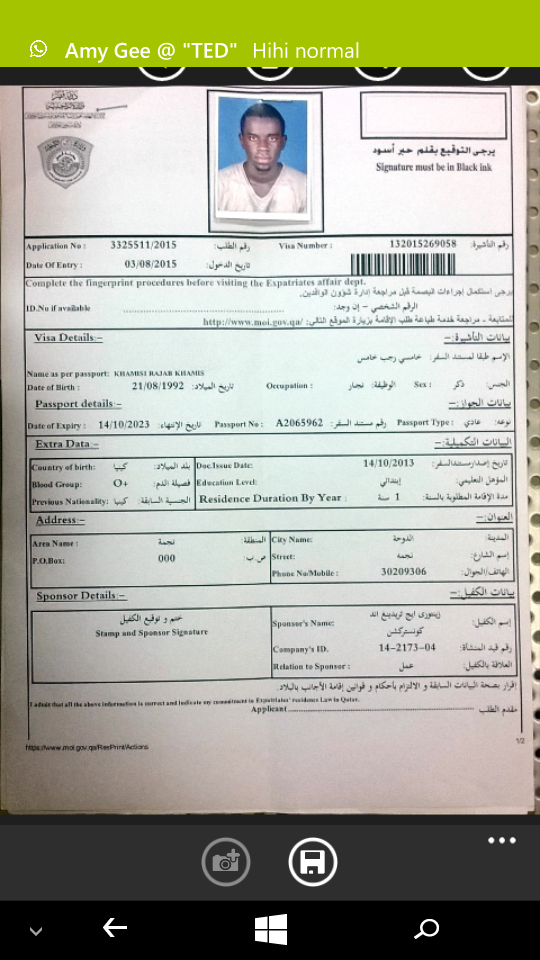 A form, incomplete, to process the work visa. 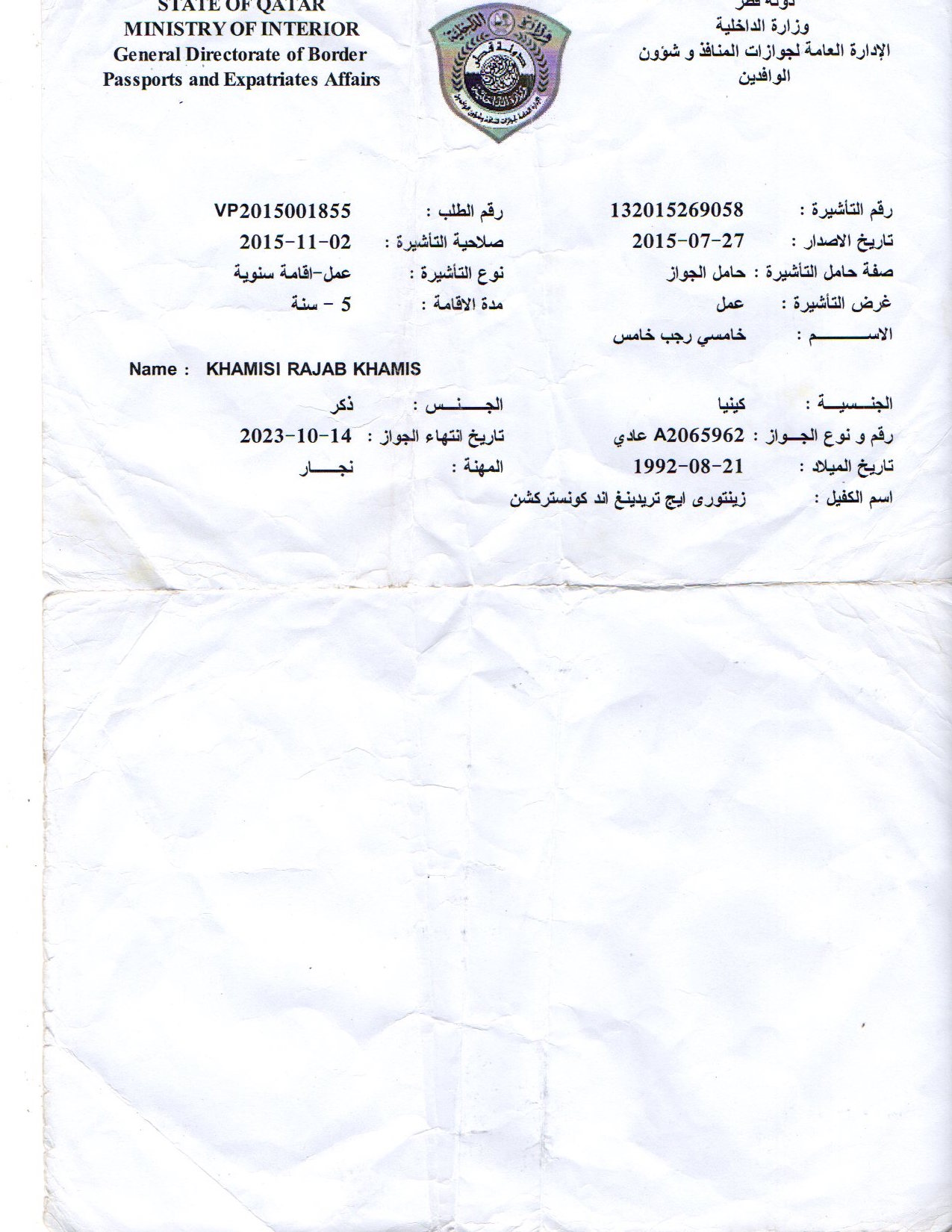 The visa on which Rajab arrived in Qatar.

A form, incomplete, to process the work visa.

The visa on which Rajab arrived in Qatar.