The Gulf region experienced as tumultuous a 2016 as the rest of the world; falling oil prices and contracted budgets compounded meagre protections for migrants, as thousands of construction workers were left stranded in Saudi, the UAE, and Kuwait, and Oman.

The bulk of media attention has focused on the Kingdom, which hosts the vast majority of stranded workers. Saudi instituted a number of un-complementary reforms this year, both in the name of workers’ rights and Saudization. New fines were introduced to punish exploitative employers, but they are collected by the state rather than the employee. The Ministry of Interior also warned migrants who overstay their visa or abscond that they would face a harsh 50,00 riyal fine and six months in jail – making no acknowledgment of the fact that most workers who abscond do so to escape exploitation. The absence of any meaningful enforcement of regulations  - including the above-mentioned penalties -  as well as the inability for migrants to change their jobs freely, or access any semblance of justice, means many workers are left with few options. 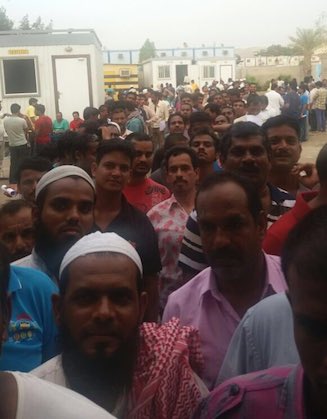 Stranded workers in Saudi were initially told to go home, with out pay.

Qatar claimed to “abolish the Kafala system,” while in reality only introducing a few moderate reforms - such as the ability to change jobs without a sponsor's permission after their contracts end, or after five years of employment - while still protecting employers' excessive power over migrant workers. Some of the worst practices of the current system remain, including the exit permit requirement, and a loophole allowing passport confiscation. The new sponsorship law came into place following a months-long, confusing amnesty for undocumented migrant workers. The country could be subjected to a commission of inquiry by the International Labour Organisation if it fails to show progress next year.

Bahrain, generally seen as the more ‘progressive’ of the Gulf states when it comes to labour migration policies, also quietly announced its abolishment of the Kafala system in December for the second time (its first claim was in 2009, and was similarly celebrated too early.) This time, the reform is said to be “implemented gradually and reviewed twice a year during two years,’ and inclusive of only 48,000 of its 595,151 expatriate workforce. The country has also considered offering flexible work permits to undocumented workers, allowing those without legal visas to work for multiple employers.

The UAE, perhaps the most secretive of the GCC states when it comes to labour reforms, announced several changes to its labour law, including a standard work contract and some scope for workers to change jobs; workers can change employers with the consent of their existing employer after six months, if the company has not provided work, or in some cases, if complaints are lodged in court. Working hours are set at 8 hours a day or 48 per week, but could be increased for certain sectors (notably, the sectors mentioned employ only migrant workers - including hotels, cafeterias, and security.)  Given the country’s hostility to independent journalism, it’s difficult to gauge the enforcement or efficacy of its policies. One certain weakness is that the contract need only be available in Arabic and English, with a third language merely optional, though employers can be subject to a Dhs20,000 fine if workers are forced to sign contracts they don’t understand. Again, these reforms fall short in ensuring workers have access to – and confidence in – the justice system.

Oman has continued its drive against undocumented workers, with hundreds arrested and deported each month. Though the Ministry of Manpower has alluded to the possibility of ending the No Objection Certificate (NOC) required for migrant workers to change jobs, no actual progress was made in eliminating this particularly oppressive element of the Kafala. A prospective new labour law is said to be focused on Omanisation, which is unlikely to be good news for expatriate workers. 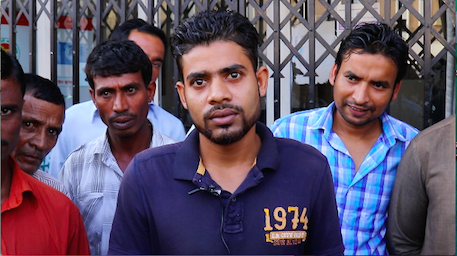 Kuwait passed a number of reforms affecting migrant workers, some ostensibly good, some bad, and some very strange; stiffer penalties for salary delays and visa trading, as well as a standard contract, were welcome and much needed, but the question of enforcement still lingers. Kuwait also recycled its bi-annual threat of deporting migrant workers en masse, a promise it has made now for at least the five previous years; this year, those threats came alongside several new hostilities against migrant workers, with the banning of expatriates from everything from lining up to say farewell to family at the airport, to attending the same hospitals as nationals.

The proposed cap on foreigners wouldn’t apply to domestic workers - a category of workers all of the Gulf states are eager to recruit, as the current 'supply' fails to meet demand. Weak MoUs between origin countries and Gulf countries and relatively new recruitment from a number of African countries means that domestic workers will continue to be excluded from legal protections and labor rights.

The region did see a few reforms affecting domestic workers this year - Kuwait set a minimum wage for domestic workers, a first in the region. Practical implementation is unclear given that the legal and social context obstruct domestic workers access to legal support, let alone justice. But the law is nonetheless an important initial step to valuing domestic work as real work; time will tell if Kuwait’s lawmakers put any teeth behind this legislation.

The UAE recently announced that recruitment of domestic workers would now be under the purview of the Labor ministry, rather than the Ministry of Interior - possible progress towards extending labor rights to domestic workers, though no authorities have offered no such indication.

Of course, the story of migration in the Gulf is more than the state and its regulations. Our  Stories Of Origin series delves deep into the lived experience of migrant workers and the homes they’ve come from; Sayyed Fadel’s photo essay offers a glimpse into the daily lives of Bahrain’s migrant workers; our Abuse Map, available in Arabic and English, provides a visual representation of just some of the consequences of the GCC’s migration regime. And our guide for employing a migrant domestic worker can help employers steer clear of exploitative practices and enjoy a better relationship with their employees.